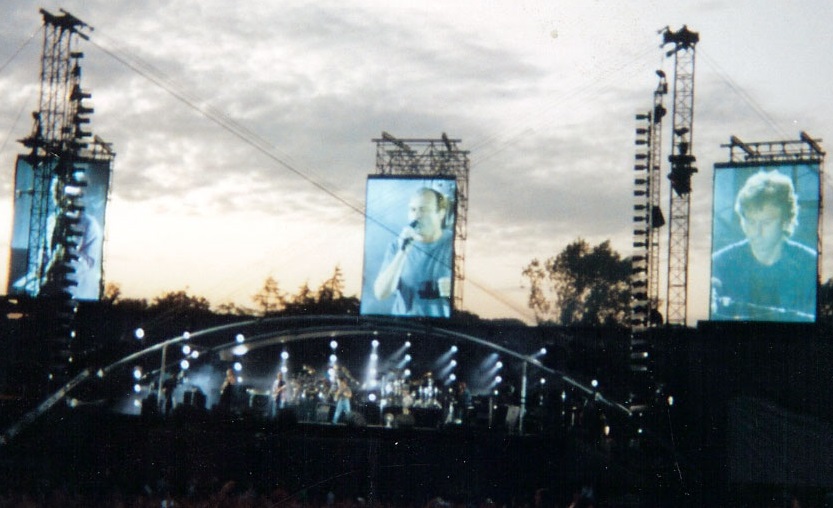 Tampa, Florida, 17 May 1992. Genesis leave the stage at the fourth show of their gigantic “We Can’t Dance” tour after just two songs. They leave behind an almost rioting audience. The band had to cancel the show after “Land Of Confusion” and “No Son Of Mine” due to Phil Collins’ throat problems. Luckily enough, this was just a one-time affair. The “We Can’t Dance” tour became one of their biggest productions in terms of stage setup and venues.

Let’s take a look back at the massive production of the “We Can’t Dance” tour.

“We Can’t Dance“*, the band’s fourteenth studio album, was released in 1991. It was another monumental blockbuster and a huge success all over the world. Despite being in the business for almost 25 years, Genesis still reached top of the charts. In terms of sales, “We Can’t Dance” was one of their most successful albums. It produced four hit singles: “No Son Of Mine”, “I Can’t Dance”, “Hold On My Heart” and “Jesus He Knows Me”. All of them were accompanied by elaborate music videos. Especially “I Can’t Dance” and “Jesus He Knows Me” stand out for their high production and sense of humour.

Of course, this blockbuster of an album had to be followed by a massive tour. Over 60 concerts were planned for North America and Europe in 1992. The band decided to play stadiums, although they were not too happy to play bigger venues. But the idea of playing three months of stadiums instead of ten months of arenas appealed to them. They did not want to be on tour for too long.

Therefore, the stage set up reached another level on this tour. With new technology available, three Sony Jumbotron video screens were put behind the stage so that everyone in the stadium, right to the back, could witness the action onstage. The band rehearsed in the Goodyear blimp hanger in Houston. It was one of only a few spaces that was large enough to accomodate the new stage set-up.

Phil Collins, Mike Rutherford and Tony Banks were of course accompanied by their long-time live members Chester Thompson and Daryl Stuermer. The band rehearsed for a few weeks. The setlist included mainly material from the new album. They added a few tracks from its predecessors “Invisible Touch“‘ and “Genesis“* and the inevitable “Turn It On Again” as an encore. A 20-minute medley was played that included the band’s most prominent material from the 1970’s. It was different to the “In The Cage”-medley they had played for 15 years and a welcoming change.

Leaving the stage in Tampa, Florida

They started the tour on 8 May 1992 in Texas. On the fourth night of the tour in Tampa, Phil Collins’ voice gave up. When necessary, he had supported his voice with various medical methods on tour. And he knew that a stadium full of fans could sing the songs word by word and help him out. But on that night he could not continue. The band left the stage after just two songs, “Land Of Confusion” and “No Son Of Mine”.

But his voice worked for the rest of the tour. They ended the first leg of the tour with a huge open-air show in Knebworth Park in August that was broadcasted on Premiere. In the autumn of 1992, the band continued their tour and played various cities in their home country. Throughout the 80’s, the had not played that many shows in Great Britain. On this leg of the tour they made up for that. The concerts at Earl’s Court in London were filmed for video and later DVD release: The Way We Walk Live in Concert*.

“The Way We Walk”

The tour also produced a double live album, “Live – The Way We Walk (The Long And The Shorts)”. It was split into “The Shorts“* and “The Longs” instead of splitting an entire show in its middle. Some fans did not like this approach, but at this point in Genesis history, it was a wise decision. Many listeners knew them for their single hits. Other fans just liked their long and epic songs. In later releases of the double live album, the songs were put into the right order.

The tour turned out to be Genesis last with Phil Collins until 2007. It was also the last tour for drummer Chester Thompson and guitarist/bassist Daryl Stuermer until 2007. By the end of 1992, none of them knew. Also, the fans did not know that they had witnessed Genesis for the last time in this incarnation (if they even to to see the 1992 tour). But as we know, the band got together again 15 years later. But that is another story.