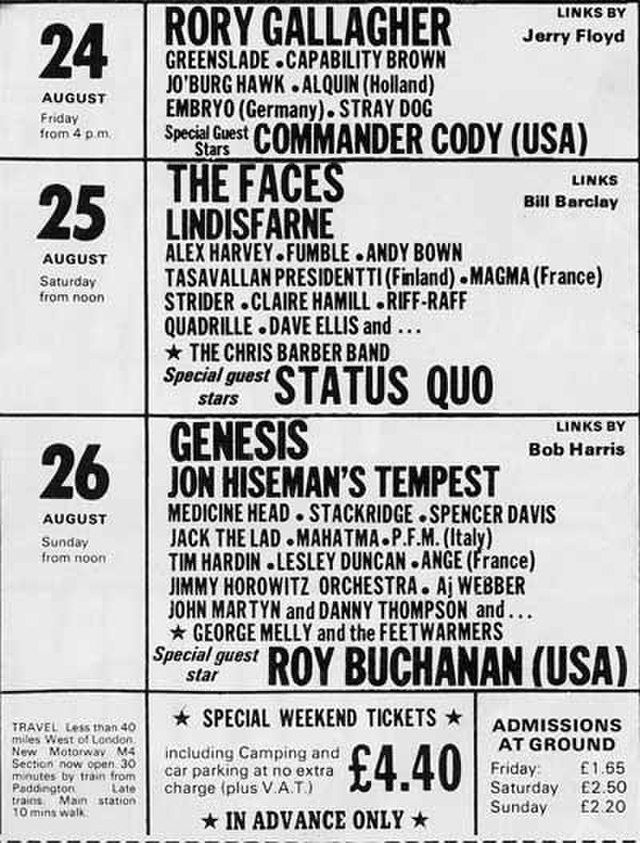 On June 26, 1971, Genesis appeared at Reading Festival for the first time.

Peter Gabriel had broken his ankle

On their first appearance at Reading Festival, Genesis were low on the bill. Other artists that performed at the festival were Lindisfarne, Terry Reid, Renaissance and Sha Na Na. There were the usual problems that a festival and its visitors have to deal with: Rain, mud and an unscheduled police squad. For Genesis, the gig at Reading followed the incident at the Friars Club, where Peter Gabriel had broken his ankle.

On June 19th, Genesis had played at Friars in Aylesbury and during the encore of “The Knife”, Peter Gabriel had jumped into the crowd. Unfortunately, the audience parted when they saw him coming and he hit the floor, breaking his ankle. Following the incident, he played at least one show in a wheelchair at the art college in Lincoln. Tour manager, roadie, sound engineer and friend of the band Richard Macphail remembers Gabriel cavorting in the wheelchair on the stage, which was a traditional theatre stage that sloped forward towards the audience. He thought that Peter was going to fall off the stage and break his neck. Luckily, he did not and the band could play Reading Festival at June 26, 1971.

The 11th National Jazz and Blues festival took place in Reading for the first time that year. Before, the event had taken place in Richmond, Windsor, Sunbury and Plumpton, but each time, the locals had complained, so the festival had to move on. The festival usually takes place in August, so admittedly it is a bit unclear to the author why the festival took place on 25, 26, and 27 June 1971. The ticket names the location as “Thames-side Arena, Richfield Avenue” and the festival is titled “Reading Festival of folk and progressive music”. The ticket for Saturday, June 26, cost £1.50.

Over the next few years, the festival would become one of the leading British rock festivals. Not only the greatest bands of the age played there, but it was also the birthplace for future superstars. Organizer Harold Pendleton was allowed to stage the festival in Reading, because the local council wanted to celebrate the town’s 1000th anniversary and really believed it to be a jazz and blues festival, which it had originally been in the 1960s.

In 1971, Genesis was not the only act of Charisma Records that played at Reading Festival. The already mentioned Lindisfarne were there as well as Van der Graaf Generator, and Bell & Arc and Audience. Other notable acts from this year were Arthur Brown, Rory Gallagher, Wishbone Ash, Medicine Head, Osibisa, Ian Matthews and Ralph McTell.

Due to their low billing, Genesis played midafternoon on the second day of the festival. Their performance was highlighted as one of the best of the event, and consequentially, they were invited back for the next two festivals.

During the summer of 1971, Genesis started to appear at outdoor rock festivals. Steve Hackett remembers that it used to rain for the first five years they played at festivals in England or Europe, always resulting in a mud bath. At Reading Festival, the power was fluctuating and the band could not get the organ in tune (and that meant that the Mellotron would be even worse to tune). They also tuned their twelve-string guitars in the dressing rooms and by the time they got on stage, they were already out of tune. Tuning a twelve-string guitar in front of an audience was almost impossible.

Not a festival band

Tony Banks thinks that Genesis were never a good festival group. It was difficult to build a dramatic atmosphere in daylight and most of the audiences did not really understand the long song with lots of chord changes. Also, the sound was mostly rubbish. Nevertheless, they builded a live following and got a reputation of being a good live band for festivals, but the best times were when they could play after dark at the end of a day with their own fans in the audience. However, at their first appearance at Reading, they already got some fans waving their Genesis flag during the gig.

One Reply to “Genesis at Reading Festival 1971”