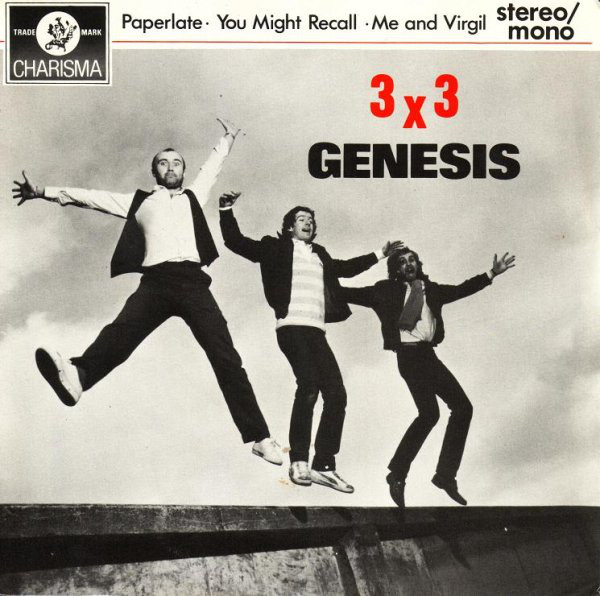 In May 1982, Genesis released “3×3”, an extended-play featuring three previously unreleased tracks from their 1981 album “Abacab”.

Three songs from the “Abacab” sessions

“Abacab*” from 1981 had brought a change in sound and style for Genesis. They had a new producer (Hugh Padgham) and had bought “The Farm” in Surrey, where they had their own studio and could take time to jam for the new record. When they put “Abacab” together, there was not enough space to include all the songs they liked. So they decided to release an EP with three leftover tracks the following year.

The three tracks were “Paperlate”, “You Might Recall” and “Me And Virgil”. All of them were written by Tony Banks, Phil Collins and Mike Rutherford together. The EP “3 x 3*” was released in May 1982 between two Genesis tours. In the US, they did not release “3×3”. Only “Paperlate” was released as a regular single with “You Might Recall” as b-side.

“Paperlate” is similar to Abacab’s “No Reply At All”. It also includes the Earth Wind & Fire horn section with which Phil Collins had worked on his first solo album the year before. The song’s title comes from the song “Dancing With The Moonlit Knight” from the band’s 1973 album “Selling England By the Pound*”. During a soundcheck of the song in 1978 or 1980, Phil was repeating the phrase “Paperlate cried a voice in the crowd…” over and over again, which inspired the band to write a song around this term.

“You Might Recall” is a romantic tune, which resembles some earlier Rutherford compositions like “Alone Tonight”. The third track, “Me and Virgil” resembles his “Deep In The Motherlode” (1978) in lyrics. This time it was Phil Collins who wrote a Wild West story. The band tried to create a “The Band”-like song. Phil Collins was so unhappy with the song that it was left off the Genesis “Archive” release in 2000, which featured many non-Album songs on CD for the first time.

The artwork was inspired by The Beatles

Inspired by the Beatles’ EP’s in the 1960’s, Genesis decided to create a cover similar to their “Twist And Shout*” EP. They also called in Tony Barrow to write the sleeve notes. Barrow had been the Beatles’ publicity man 20 years earlier. He wrote the Genesis sleeve notes in the same style (“These cheeky chappies from Guildford…”).

One reviewer was not familiar with the Beatles original and misunderstood the design for being serious. But it was another sign of the band’s humour and the EP was a success for them. With “Paperlate” they appeared on “Top of the Tops” once more. The EP went to number 10 in the British charts.

In the same year, Genesis also released the successful live album “Three Sides Live*”. As EP’s rarely charted well in America, they decided to put the “3×3” songs on the fourth side of the live album and not release the EP individually. To complete the fourth side, they added two leftovers from “Duke” (1980): The Rutherford composition “Open Door” and the Banks composition “Evidence Of Autumn”. The UK on the other hand had a fourth side live.