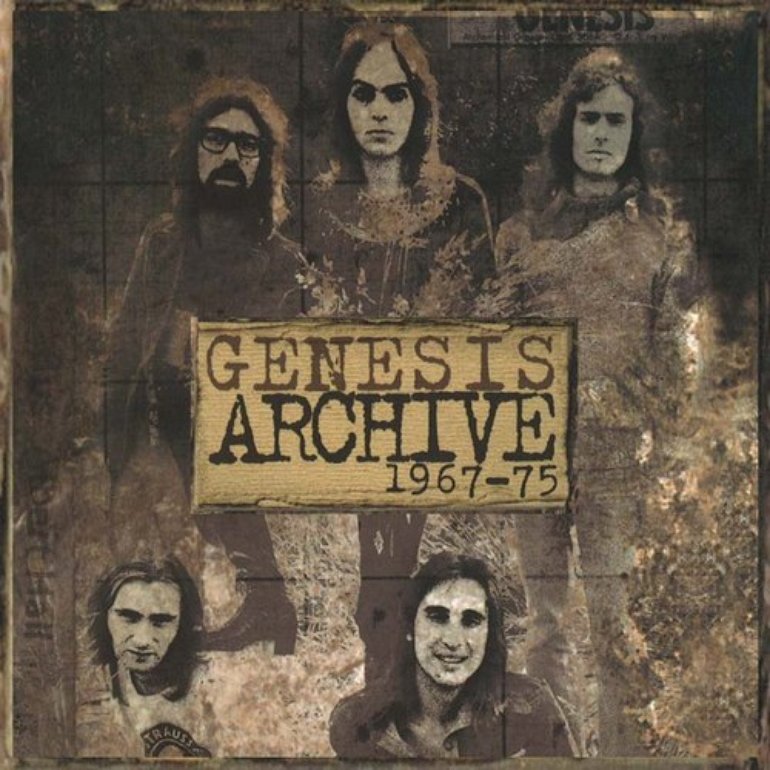 The plans to release “Archive” box sets dated back to 1994

But over the years, there were delays and plans were changed. The recordings were released on two box sets, the first one being “Archive 1967-75“* , released in 1998, the second one being “Genesis Archive 2 1976-1992“*, released in 2000, which covers the era with Phil Collins on lead vocals. Both sets feature unreleased live performances, studio tracks and demo songs.

A complete live performance of “The Lamb Lies Down On Broadway”

“Archive 1967 – 1975” is a box set that includes four discs. The mixing was done by Genesis producer Nick Davis. The first two discs feature a complete live performance of Genesis’ magnum opus “The Lamb Lies Down on Broadway“*. When the band toured the concept album in 1974/75, they played the whole double album. After this tour, Peter Gabriel left the band. The live performance in the box set comes from The Shrine Auditorium, Los Angeles. Unfortunately, Peter Gabriel’s stories between songs about the adventures of Rael were left out.

Also, it is not a completely “live” recording. Peter Gabriel and former lead guitarist Steve Hackett re-recorded some of their parts in 1995. You can hear the difference in Gabriel’s voice if you compare the studio versions from 1974 to the “live” version on “Archive I”. Gabriel recorded his vocals at his Real World Studios. Also, the last song “It”, fades out because the tape machine at the Shrine ran out halfway through the song.

The live performance in general sounds more powerful than the studio version and the crowd seems to be enthusiastic. Apart from that, the songs are almost identical to the studio versions. The only exception is “The Waiting Room (Evil Jam)”, which was an instrumental with lots of space for improvisation that was therefore played differently every night. Apart from that, especially the title track, “Fly On A Windshield” and “Carpet Crawlers” stand out.

A live performance of “Supper’s Ready” from 1973

Disc 3 includes live performances from the Rainbow Theatre in London, recorded on the “Selling England By the Pound“* tour in 1973. We finally get to hear songs like “Dancing With The Moonlight Knight” and “Supper’s Ready” live with Peter on vocals on an official release. Here, the stories are included. It also features a 1971 BBC recording of “Stagnation” and b-sides and studio tracks from that era like “Twilight Alehouse” and “Happy The Man”.

The last disc is also the most interesting one, at least for the fans. It features songs from the band’s earliest period, still with Anthony Phillips on guitar. There are BBC sessions and many demo songs. You can hear the band “becoming” Genesis on this disc. Some of the tracks are real gems, from the early version of “Dusk” to the appealing “Hey!”. There is an atmosphere in these early recordings that went missing after Ant Phillips left the band.

Apart from the four discs, there is a 82-page booklet which contains the band’s history and interviews with band members and associates.

So “Archive 1967 – 1975” is a quite interesting box set. We finally get to hear official live versions of Gabriel-era songs sung by him. The only official live release with him had been “Live“* from 1973, which only covers songs from “Trespass“*, “Nursery Cryme“* and “Foxtrot“*. The inclusion of b-sides and unreleased studio tracks like “Twilight Alehouse” make this box set special. Some would argue that disc 4 is only for the hardcore fans, but it also is the most surprising and most interesting of the four discs. Unfortunately some rare tracks and demos that are known to exist did not make it onto the box set. But all in all, “Archive 1967-75” is an extraordinary release. Fans seemed to agree with that: It reached no. 35 in the UK charts in 1998.

The band met at Heathrow Airport to promote the release

To promote the release of “Archive I”, Genesis members past and present reunited for a photo shoot (and a following dinner) at Heathrow Airport in May 1998. There were Tony Banks, Peter Gabriel, Anthony Phillips, former drummer John Silver, Phil Collins, Steve Hackett and Mike Rutherford. The band’s first drummer Chris Stewart only made it to the dinner. Trespass-era drummer John Mayhew did not attend the event.

Genesis’ next “Archive” release would be in 2000. It would be entitled “Archive II 1976 – 1992” and feature the period with Phil Collins as lead vocalist.

In May 1982, Genesis released “3×3”, an extended-play featuring three previously unreleased tracks from their 1981 album “Abacab”.

Three songs from the “Abacab” sessions

“Abacab*” from 1981 had brought a change in sound and style for Genesis. They had a new producer (Hugh Padgham) and had bought “The Farm” in Surrey, where they had their own studio and could take time to jam for the new record. When they put “Abacab” together, there was not enough space to include all the songs they liked. So they decided to release an EP with three leftover tracks the following year.

The three tracks were “Paperlate”, “You Might Recall” and “Me And Virgil”. All of them were written by Tony Banks, Phil Collins and Mike Rutherford together. The EP “3 x 3*” was released in May 1982 between two Genesis tours. In the US, they did not release “3×3”. Only “Paperlate” was released as a regular single with “You Might Recall” as b-side.

“Paperlate” is similar to Abacab’s “No Reply At All”. It also includes the Earth Wind & Fire horn section with which Phil Collins had worked on his first solo album the year before. The song’s title comes from the song “Dancing With The Moonlit Knight” from the band’s 1973 album “Selling England By the Pound*”. During a soundcheck of the song in 1978 or 1980, Phil was repeating the phrase “Paperlate cried a voice in the crowd…” over and over again, which inspired the band to write a song around this term.

“You Might Recall” is a romantic tune, which resembles some earlier Rutherford compositions like “Alone Tonight”. The third track, “Me and Virgil” resembles his “Deep In The Motherlode” (1978) in lyrics. This time it was Phil Collins who wrote a Wild West story. The band tried to create a “The Band”-like song. Phil Collins was so unhappy with the song that it was left off the Genesis “Archive” release in 2000, which featured many non-Album songs on CD for the first time.

The artwork was inspired by The Beatles

Inspired by the Beatles’ EP’s in the 1960’s, Genesis decided to create a cover similar to their “Twist And Shout*” EP. They also called in Tony Barrow to write the sleeve notes. Barrow had been the Beatles’ publicity man 20 years earlier. He wrote the Genesis sleeve notes in the same style (“These cheeky chappies from Guildford…”).

One reviewer was not familiar with the Beatles original and misunderstood the design for being serious. But it was another sign of the band’s humour and the EP was a success for them. With “Paperlate” they appeared on “Top of the Tops” once more. The EP went to number 10 in the British charts.

In the same year, Genesis also released the successful live album “Three Sides Live*”. As EP’s rarely charted well in America, they decided to put the “3×3” songs on the fourth side of the live album and not release the EP individually. To complete the fourth side, they added two leftovers from “Duke” (1980): The Rutherford composition “Open Door” and the Banks composition “Evidence Of Autumn”. The UK on the other hand had a fourth side live.