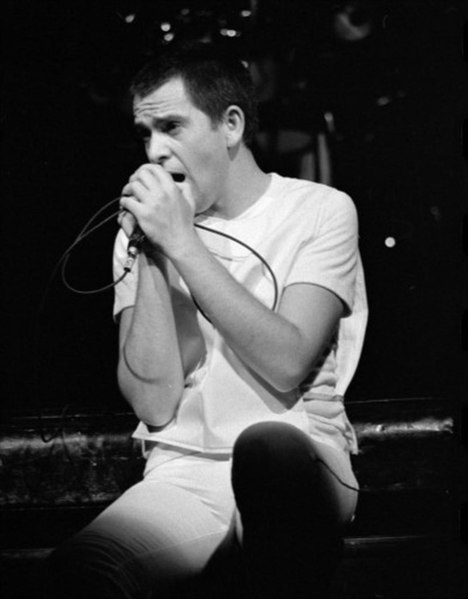 Peter Gabriel’s first gig as solo artist took place in the Capitol Theatre in Passaic, New Jersey on 2, 3 or 5 March 1977.

His first album had come out in February 1977

The album Peter Gabriel* had come out in February and had produced the hit “Solsbury Hill”. Just like for the album, the motto of the following tour was “Expect the Unexpected”. His band was a group of top studio musicians and old friends.

Tony Levin was there on bass and has been with Peter since then. The bass player, who had worked among others with Paul Simon, is the only musician from the first album that is still with Peter Gabriel today.

The other musicians on that first gig and the first leg of the tour were Allan Schwartzberg on drums, Larry Fast on synthesizers, Steve Hunter on guitars, Jimmy Maelen on percussion and Phil Aaberg on keyboards.

A bit surprisingly, Robert Fripp, who had been on the album, was also there on guitar; he performed on the tour as “Dusty Rhodes”, often standing behind the amps or offstage, showing once again that he did not like the rock-tour machinery. He also preferred to be introduced by Peter as the totally unknown Dusty Rhodes.

When did they play the first gig?

The first gig of the tour took place in the Capitol Theatre in Passaic, New Jersey in early March 1977. There are various dates named for his first gig: The 2nd, the 3rd or the 5th. Peter opened the show with “Here Comes the Flood” with just him on vocals and piano and Fripp’s guitar. It was a deliberate and interesting way not only to open the show, but also to present himself as a solo artist. Gone were the days of masks and costumes, here was a simple musician on the piano wearing jogging clothes. On the second song “On the Air”, the whole band set in and the groovy synths woke up the audiences and they went wild. “Moribund The Burgermeister”, which was seen by some as a throwback to Genesis, still sounded a bit stiff. “Solsbury Hill”, his first solo hit that had also introduced him to many American listeners, was also in the set. The songs were not as orchestral as on the album, but more aggressive.

Alongside the songs from Pete’s solo record there were some cover versions in the set. The inclusion of Marvin Gaye’s “Ain’t That Peculiar” was a tribute to Gabriel’s love for soul music, and the Kinks cover “All Day (And All Of The Night)” sounded rather heavy. The almost complete American band was professional, had a lot of fun (you can hear that especially in the R&B cover) and there was a relaxed atmosphere between the musicians, something that a proper band sometimes lacks onstage. Peter seemed to enjoy it a lot.

On the encore, he returned with Rael’s leather jacket, jeans and T-Shirt and performed “Back In N.Y.C” from The Lamb Lies Down On Broadway*. He knew that the audience expected solo and Genesis material. Throughout the set, some fans had even felt disappointment over the stark staging and that only solo songs were played. But the crowd exploded when Peter came out for the encore of “Back in N.Y.C”. It left them wanting more. And they got it. Peter Gabriel became a successful solo artist with a varied career and a distinctive identity. The fact that he once sang with Genesis only became a footnote when we look back on his career from today’s point of view.