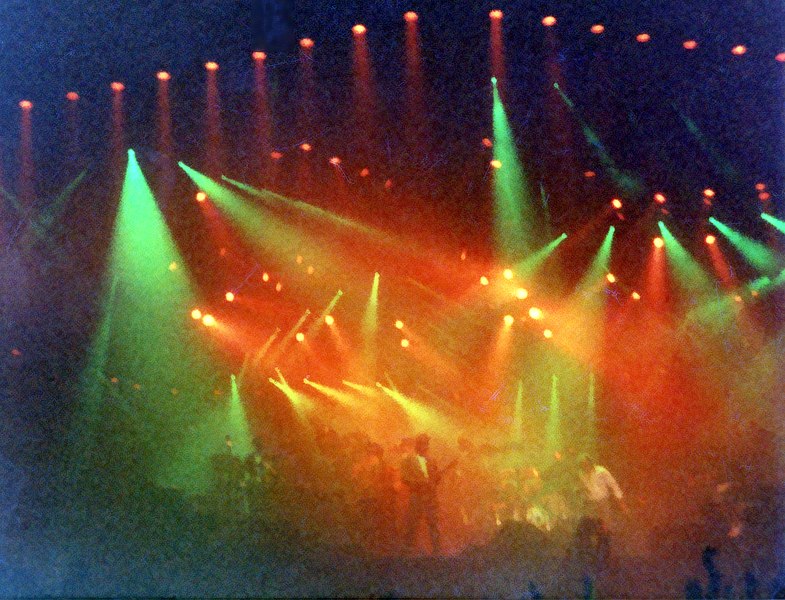 On July 4, 1987, Genesis finished their gigantic Invisible Touch tour at Wembley Stadium. It was the fourth sold out night in a row at Wembley.

In 1986, Genesis released the album “Invisible Touch“*. It became their most successful album, peaking at #1 in the U.K. and #3 in the U.S. It produced five hit singles: “Invisible Touch”, “Tonight Tonight Tonight”, “Land of Confusion”, “In Too Deep” and “Throwing It All Away”. Songs like the title track, “Tonight, Tonight, Tonight” and “Land Of Confusion” with its famous spitting image video would dominate the radio and music TV stations and the international charts of 1986/1987. Genesis were everywhere and bigger than ever. So of course, the band went on a massive tour through North America, Australia, Japan and Europe before finishing in Britain with four sold-out nights at Wembley Stadium in front of 300,000 people.

The tour began in the U.S. in September 1986 and included 112 dates and sold close to two million tickets. It ended in July 1987. In Australia and New Zealand, the five-man line-up was accompanied by a four-piece string section on “In Too Deep” and “Your Own Special Way”. They had to invite the quartet because of local regulations that required them to employ local musicians.

At this time, the band was not only a hit-machine, but a working and brilliant live act. The Vari Lite light show was impressive as always. The band had much material to rely on, but chose mainly new songs from their hit album and the albums before.

The shows were always opened with “Mama” (which sometimes lacked a bit of atmosphere in daylight) and ended with the “Turn It On Again” hit medley that the band had established on the previous tour. The medley included “Everybody Needs Somebody to Love”, “Satisfaction”, “Twist and Shout”, “Pinball Wizard”, “All Day and All of the Night” and “Karma Chameleon”.

Older songs in the set included “Los Endos”, “Home By The Sea” (including it’s meanwhile standard ghost-story introduction) and another “In The Cage” medley. When the tour began, they had played “In That Quiet Earth” and the second half of the epic “Supper’s Ready” after “In The Cage”. However, during the tour Phil had difficulties reaching the higher notes in “Supper’s Ready”, so by the middle of the tour they had gone back to the usual ending of “In That Quiet Earth” and “Afterglow”.

New songs included “Domino” (with another – soon to be famous – introduction by Phil), “Tonight, Tonight, Tonight”, “Throwing It All Away”, where the call-and-response singing developed throughout the tour, and “Invisible Touch” itself.

By the time Genesis got to Wembley, they had performed the set so often that it had become a true piece of fine art and musicianship. Interestingly, only two shows were scheduled at Wembley, but the demand for tickets was so high, that a third and then a record-breaking fourth night were added.

The Wembley shows were filmed and released as video and as DVD in 2003*. Unfortunately the famous “In The Cage” medley was left out of the release because on every night, the tapes had to be changed during that song.

Apart from that, the results and the performance are astonishing. The band truly ended the tour on a high note there. Looking back at the videos and listening to the songs and performances, we can say that Genesis were at their peak at this very point at Wembley Stadium. Afterwards, the fans had to wait four more years for a new Genesis record.

On July 3, 1977, Genesis played the last show of their “Wind And Wuthering” tour and (unbeknown to them at that point) also the last show with lead guitarist Steve Hackett.

In December 1976, Genesis had released “Wind and Wuthering“*, their second album since Peter Gabriel’s departure. The band had become a foursome the year before, drummer Phil Collins had taken over the vocal duties. He had proved that he could fill this role easily on the previous album “A Trick of the Tail“* and the following tour in 1976.

By this point, keyboardist Tony Banks and guitarist/bassist Mike Rutherford were the main songwriters with Phil Collins being more of a player and arranger. Guitarist Steve Hackett felt that not enough of his material was used. He was frustrated about his role in the group and decided to leave Genesis after the 1977 tour.

The band set out for a huge tour in 1977 that would lead them to South America for the first time and through Europe and the US. On drums, they were accompanied by American drummer Chester Thompson. It was his first tour with them and he would remain with the band as a live drummer until 2007 (with a short interruption in the 1990s).

Genesis reached a new peak in live performances and was voted “Best live group” in 1977. This was captured in the double live album “Seconds Out“*.

The last show of the tour (and also Steve Hackett’s last show as a member of Genesis) took place in the Olympiahalle, Munich, on July 3, 1977. They opened the set with “Squonk” as they had done throughout most of the tour, then they played “One For The Vine”, a Banks composition from the new album. “Inside And Out” from the recent EP “Spot The Pigeon” was added on some European dates and was also played in Munich. Among the highlights of the show were songs like “The Carpet Crawlers”, “I Know What I Like” and “Supper’s Ready”, some of which had changed a lot since the days when Peter Gabriel sang them. Also, the band had started to play medleys on the tour before and continued to do so on the “Wind & Wuthering” tour. “Dance On A Volcano” and “Los Endos” were combined as well as “The Lamb Lies Down On Broadway” and the closing section of “The Musical Box”. The band also played “Firth Of Fifth” that night in which Steve plays the famous guitar solo. Neither the fans nor the band knew that they had witnessed him playing it live for the last time.

Steve Hackett had been the first Genesis member to record a solo album. There, he included some of the music that was not used on Genesis albums. During the period as a four-piece-band, he wanted to have a certain percentage on each album for his own songs. The others disagreed; they were a democratic band. So he started recording solo albums and felt that his input on Genesis albums became less and less.

Also, when the band mixed the live album “Seconds Out” in July 1977, he could not stand listening to tracks like “I Know What I Like” anymore after having played them for months at this point. Also, he felt that after playing shows with audiences of 20.000 people, there was nothing new to strive for. So one day he phoned Mike Rutherford and told him he wanted to leave. Mike knew that Steve had been unhappy in Genesis for some time, so he did not try to talk him out of it. Later that day or the following day, Phil Collins drove from West London to Trident Studios, where they mixed the live album. He passed Steve on the street and told him to jump into the car. Steve acted a bit oddly, said “Speak to Mike, he’ll explain” and went off. When Phil arrived at the studio, Tony and Mike informed him that Steve had left the band.

The three remaining members then went on mixing “Seconds Out” and afterwards went into the studio to record their next album. They would remain a three-piece-band in the studio for the rest of their career and Steve Hackett would continue his career as a solo artist.