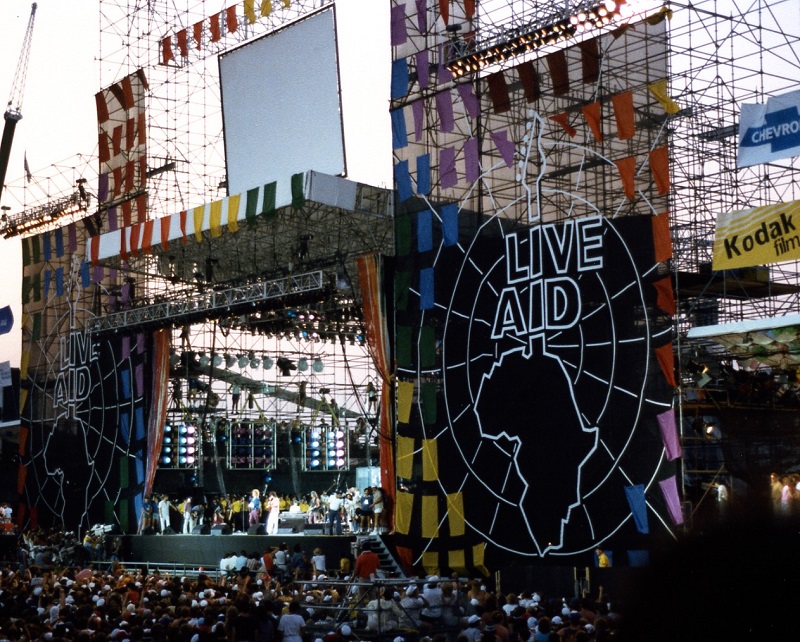 On July 13, 1985, Phil Collins was the only performer to appear on both Live Aid shows in London and Philadelphia.

Phil Collins is all over the world

In the mid-1980s, it seemed as if Phil Collins had already achieved everything: As a solo artist and as a member of Genesis he had number one hit singles, chart-topping albums and sold-out world tours. By 1985, his third solo album “No Jacket Required“* had been a massive success and produced hit singles that topped the charts worldwide. Phil Collins’ music was all over the world – and so would he be on July 13, 1985.

On July 13, 1985, Phil Collins made rock history. He did something that no-one had done before (and probably not since): He appeared live on television around the world twice in a day from two different continents. And as usual with Phil, this had not been an elaborate act of profiling himself as an artist. It had been for the benefit of millions of starving people in Africa. The two appearances onstage and on television had been part of Live Aid, two shows that had been organized by Bob Geldof. The man of the day however, was Phil Collins.

The famous Live Aid concerts from 1985 were the continuation of the Band Aid single “Do They Know It’s Christmas?” from 1984, in which musician Bob Geldof had gathered many famous pop stars to raise money for the poor starving population in Ethiopia. The concept worked and half a year later, the Live Aid performances were celebrated with the same intention. There were two parallel concerts, one in London, one in Philadelphia, and the whole 80s pop world seemed to participate in the event. Phil Collins had already played drums on the the million-selling Band Aid single “Do They Know It’s Christmas”. He did not sing on it, as he had recently recorded his own solo album and duets with Philip Bailey and Eric Clapton and the record company told him not to sing anymore until his album “No Jacket Required” had come out and he would be on the tour that followed.

So what exactly happened on July, 13, 1985, “the greatest day in the history of pop music”? Phil Collins proved the impossible, playing at both shows. He appeared at Wembley Stadium in London in the early afternoon and played “Against All Odds” and “In The Air Tonight” alone at the piano. He remembers sweating on the white stage and therefore, his finger slipping off the piano on “Against All Odds”. The bum note was not only heard in front of 80,000 people in Wembley, but also by a global telly audience of 1 billion people. Phil thought “Oh God, what a good start for the day this is.”

Then he was joined by his friend Sting on guitar and vocals for “Long Long Way To To” from “No Jacket Required” (Sting had also provided backing vocals for the studio version). Then the duo played “Every Breath You Take”. Phil left the stadium afterwards, crossed the Atlantic with a Concorde, and played his solo songs in Philadelphia the same way he did in London. In Philadelphia, he also joined his friends Eric Clapton and Led Zeppelin. Phil had arrived at the John F. Kennedy Stadium at 7pm, was at the show at ten past, went to Eric to ask what they would play and then went onstage with him at 7.30pm. In between, he also rushed to Robert Plant’s caravan to have a chat with Led Zeppelin about their gig. This pretty much sums up the energy of Phil Collins in the 1980s.

Phil Collins had been an international superstar at this point, but his legendary performances as the only one who appeared at both Live Aid shows, certainly boosted his profile and made him as a solo artist and personality become more famous than Genesis, the band he was part of.

Looking back, Live Aid was a terrible example of using clichés. It is the prime example of “rock musicians trying to help poor Africa”. The intention was certainly good, the realization was maybe good-hearted, but not that effective. The Christmas single with its awful lyrics (“Do they know its Christmas time at all?” – this is colonial thinking at its best) and the Live Aid performances raised a lot of money and made people aware of the problems, but the result was that much, if not all, of the money was taken by the corrupt Ethiopian government. They used it to prop up the brutal dictator Mengistu. Furthermore it turned out that part of the relief donations were diverted by a rebel group to buy weapons. And also, very little food and medicine left the port cities of Assab and Massawa. It was more important to unload military hardware from Soviet ships, leaving hundreds of thousands of tons of food rotting on the docks. Bob Geldof, founder of Live Aid, was seen on TV with Mengistu, smiling and joking around, as he handed over the famine money.

Geldof had actually been warned about Mengistu and his dismantling of tribes, resettlement marches and slaughterings in which 100,000 people died. However, here one can see how the charity for ‘poor Africa’ can turn out and how someone like Geldof, who might have had his best interests, can turn his favours against himself.

For Phil Collins, playing at both concerts helped him gain even more popularity and becoming a proper international superstar. He also helped the event to become even more memorable.