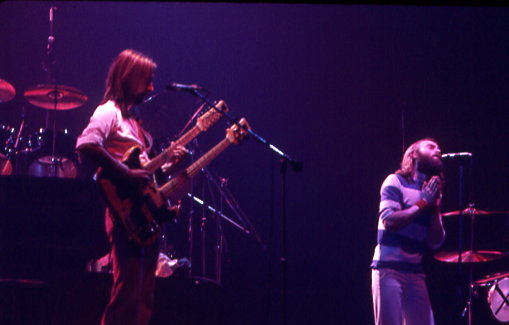 In 1975, Peter Gabriel left Genesis. After unsuccessfully auditioning for a new singer, drummer Phil Collins took over and sang on “A Trick Of The Tail“* (1976), the first album after Gabriel’s departure. But he did not want to sing on the following tour. This is the story of how he became Genesis frontman.

Phil Collins did not want to be the singer

The album “A Trick of the Tail” was a big success and showed that Genesis could survive the loss of their lead singer Peter Gabriel. Phil Collins showed his singing skills and his variety of range on heavy tracks like “Dance On A Volcano” and softer songs like “Ripples”.

But Phil Collins did not want to be the singer. He wanted to be the drummer, which for him was the most respectable part of the group. In his eyes, the singer was only up front to wiggle his bum and look good. So he was very reluctant, when the band planned to tour the new album. Would he sing? Who would play the drums? Who would be the singer if he played drums? Tony Banks, Mike Rutherford and Steve Hackett already knew the answer and convinced him to become their proper frontman.

Bill Bruford of Yes was going to be the drummer for the tour. With him in the band, there was no chance they could fail. Their first gig of the tour was London, Ontario, on 26 March 1976. The audience knew that Phil Collins could sing. The band’s new album had sold better than any of its predecessors.

Could he replace Peter Gabriel?

But what about the older songs? Could Phil replace Gabriel and sing his songs? He could. They had similar voices and Phil had always accompanied Peter as a backing vocalist. So there was no problem when Phil Collins approached tracks like “The Lamb Lies Down On Broadway”, “Firth Of Fifth” or the epic fan favourite “Supper’s Ready”.

Also, the new material was received very well. On the song “Robbery, Assault & Battery”, Phil could show his acting skills from drama school and bring the Victorian story to life. And the instrumental “Los Endos” became even more adventurous, when it was played with two drummers.

The addition of Bruford was the right decision at that point. Having played with Yes, he was a well-known drummer in the progressive rock world and one of the best out there. Two drummers onstage were something new for Genesis. During the instrumental parts, Phil joined Bill and the two drummers added a new dimension to the music. If compared to later shows, when Phil played with Chester Thompson, Bill and Phil played more against each other than with each other. The “double-drumming” worked much better with Chester Thompson from the next tour onwards.

The audience was happy. They wanted this line-up to work and they welcomed the “new” singer because he came from within the group.

They also liked Phil’s down-to-earth approach combined with a bit of Pythonesque humour. In fact, the band seemed more relaxed onstage and the focus was not only on the front man, but also on the other members. On “I Know What I Like”, Phil involved them by putting funny hats on their heads and singing together with Mike Rutherford into one microphone. And he invented his famous tambourine dance during the song which even made Tony Banks smile onstage.

Peter was the mysterious traveller, whereas Phil was more the bloke next door. He did not tell strange stories but communicated with the audiences directly. Peter Gabriel was really happy that Phil replaced him. He knew that technically he was a better singer than himself. And he also knew that Phil’s communication with the audience would work.

And he was right. Although Phil was nervous on this first show in London, Ontario, this approach worked – the band went on with him as lead singer since then, only with a short interruption in the 1990’s when Phil also left the group and Ray Wilson took over. But this is another story.