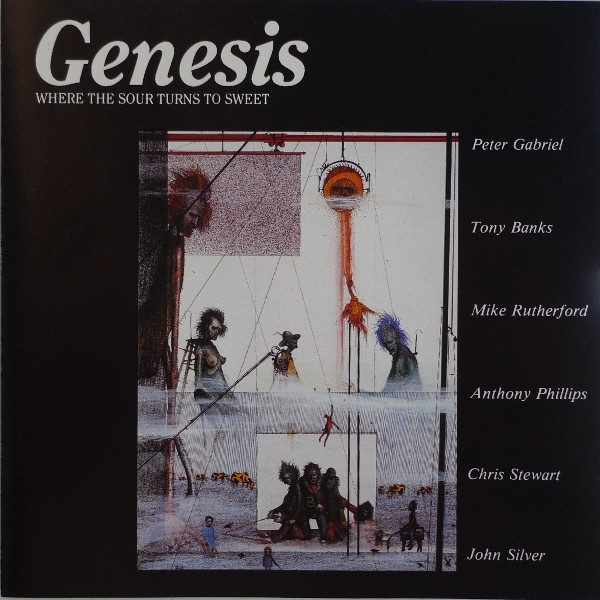 In June 1969, Genesis’ third single “Where The Sour Turns To Sweet”/”In Hiding” was released on Decca. It was released to raise interest in the LP “From Genesis to Revelation”, but to no avail.

By 1969, Genesis had released two singles on Decca Records: “The Silent Sun” and “A Winter’s Tale“, both in 1968, both produced by Jonathan King. King had then produced their first proper album “From Genesis to Revelation“*. At this time, the band consisted of Tony Banks (keyboards), Peter Gabriel (vocals), Anthony Phillips (guitars), Mike Rutherford (guitars and bass) and John Silver (drums). The album became a sort of concept album about the history of mankind, but the music was still far from being progressive. To the band’s disappointment, King added a string arrangement in the production which made the whole album sound very soft.

The album got about the same interest as the previous singles – not very much at all. So it was decided that a single off the album should be released. “Where The Sour Turns To Sweet” was chosen.

When The Sour Turns To Sweet

The song itself had been in the band’s repertoire for quite some time. They had already recorded it among three other songs in a one-hour session at Regent Studios in London, where many rock legends had recorded, in 1967. Jonathan King had taken them there to record a tape that was sent to Decca Records. The label had been impressed and signed them and King went into the studio with them again, this time to Advision Studios, to produce a reprise of “Where The Sour Turns To Sweet” for their debut single.

The session was disastrous, the band (and the producer) were unexperienced and the idea was abandoned. Then, in 1968, the two other singles were released and finally, in June 1969, the long-delayed “Where The Sour Turns To Sweet” was set to release.

So on June 27, 1969, the album version of “Where The Sour Turns To Sweet” was released as a single, backed with “In Hiding”. It was their third single on Decca Records and also their last, as it was a unsuccessful as its predecessors. There were however, thoughts about releasing a remixed version of “In The Beginning” as single, too, but these plans were never realized.

“Where The Sour Turns To Sweet” begins with a bluesy piano phrase and the snapping of fingers, giving it a jazzy swing feel. The added strings by Arthur Greenslade really get in the way of this powerful song. The lyrics are already a bit humorously and Peter Gabriel knows how to emphasize the words and use his voice. It definitely is one of the outstanding tracks of the album and has its charm, only the fade-out seems a bit uninspired.

Tony Banks remembers that he was sent to disc jockey, singer and TV presenter Tony Blackburn to accost him in the street and tell him to play the single on his show. Tony Banks said “Well, don’t play the A-side, play the other side” (“In Hiding”). It was an embarrassing situation for both of them, but Blackburn was important enough for the band to risk it.

The end of their relationship with Jonathan King

After the album and all the single releases failed to chart and the band moved into a different musical direction than King, their ways parted. They went to the country to think about their future and write new music. Jonathan King however, had given them one lasting legacy: Their name Genesis.