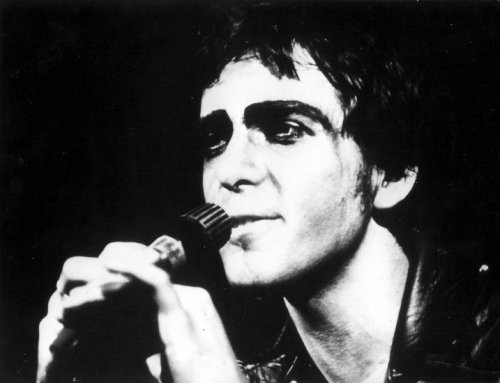 On 22 May 1975, Genesis played the last show of their ambitious “The Lamb Lies Down On Broadway” tour. It was also their last gig with Peter Gabriel as lead singer.

“The Lamb Lies Down On Broadway”

In 1974, Genesis went into the studio to record the album “The Lamb Lies Down on Broadway*”. It was a double concept album, based on a complex story by lead singer Peter Gabriel about a Puerto Rican boy named Rael. Rael lives in New York City and is sucked into a netherworld, where he encounters strange characters on his adventures.

The story and the American setting were a break from their earlier tales of British myth and fantasy. Previous to the album, the band had toured North America and were trying to become successful in the United States. It was also (after the failed attempt on their first record) their first real “concept album”, a trademark for many progressive rock bands.

There were tensions going on inside the band, when they wrote the ambitious album. Peter Gabriel wrote the lyrics and the story separately, while his bandmates wrote all the music. Only the lyrics for one song, “The Light Dies Down On Broadway”, were written not by Gabriel, but by Tony Banks and Mike Rutherford. Most of the music came from jam sessions by the trio Tony Banks (keyboards), Mike Rutherford (bass and guitars) and Phil Collins (drums). Lead guitarist Steve Hackett did not contribute much to the music.

Tensions within the group

There were two main reasons for the split between Gabriel and the rest of the band that overshadowed the making of the album: For one, William Friedkin, director of “The Exorcist*” was interested in working together with Peter Gabriel on a film script. Peter Gabriel was interested and even thought about leaving the band for this project, but Friedkin backed away when he realized that.

The other reason was that Peter’s wife Jill was pregnant with their first child Anna. She was was born in July ’74 and there were some complications in the aftermath. Gabriel started to alienate from the band during that time. He was the first one to have a child and see that there were other opportunities and possibilites in life besides being in a rock band. His inner conflict is also reflected in the story of “The Lamb Lies Down On Broadway”, for example in the lyrics of “In The Cage”: “Get me out of this cage!”

Up to this day, the album divides fans and critics. Upon its release, “The Lamb Lies Down On Broadway” received decidedly mixed reviews and was a commercial failure. Ticket sales did not go as well as planned and they had to cancel several shows. Nowadays it is looked upon in a hazy retrospective because it is Gabriel’s last work with the group.

Peter Gabriel was frustrated by the failure in terms of success and sales, especially because it was his story. For the tour, the band decided to play the entire album live, often to an audience who had never heard it because the tour began before the album was released.

Having become famous for his use of masks and costumes, Peter Gabriel wanted to use visual aspects to underline the story of the album. This time he overused them. Again, he wore costumes, the most famous being the “Slippermen” outfit, which covered him from head to toe and did not allow him to get the microphone close enough to his mouth, so his vocals could not be heard clearly. The band did not like this exaggeration and felt that the costumes and the performance had become the focus of the show to the disadvantage of the music.

The spectacular stage show also brought along some problems. There were slides at the back of the stage and they never were in the right order or stopped and did not move on. One night, a dummy of Peter Gabriel, which used to mirror him during one of the songs, was replaced by a naked roadie. And once when there had to be a small explosion for one song, the production manager caused a big explosion, so loud that the band stopped playing in the middle of the song. He poked his head round the curtain and said “Sorry!” to which Phil Collins shouted back: “You’re fired!”

During the course of the tour, Peter Gabriel decided to leave. It was no surprise to manager Tony Smith and the rest of the band. Smith only wanted Gabriel to finish the tour and announce the news afterwards.

Peter Gabriel played his last gig with Genesis at St Etienne in France in May 1975. It was a strange last gig, because St Etienne was meant to be the penultimate date of the tour, but the final date was cancelled just the day before. And so, Gabriel’s time with Genesis was over. He had founded the band in 1967 with Tony Banks, Anthony Phillips and Mike Rutherford. When it was announced publicly, the fans were greatly shocked. Many doubted if Genesis could survive without him but we know they did and so did he.